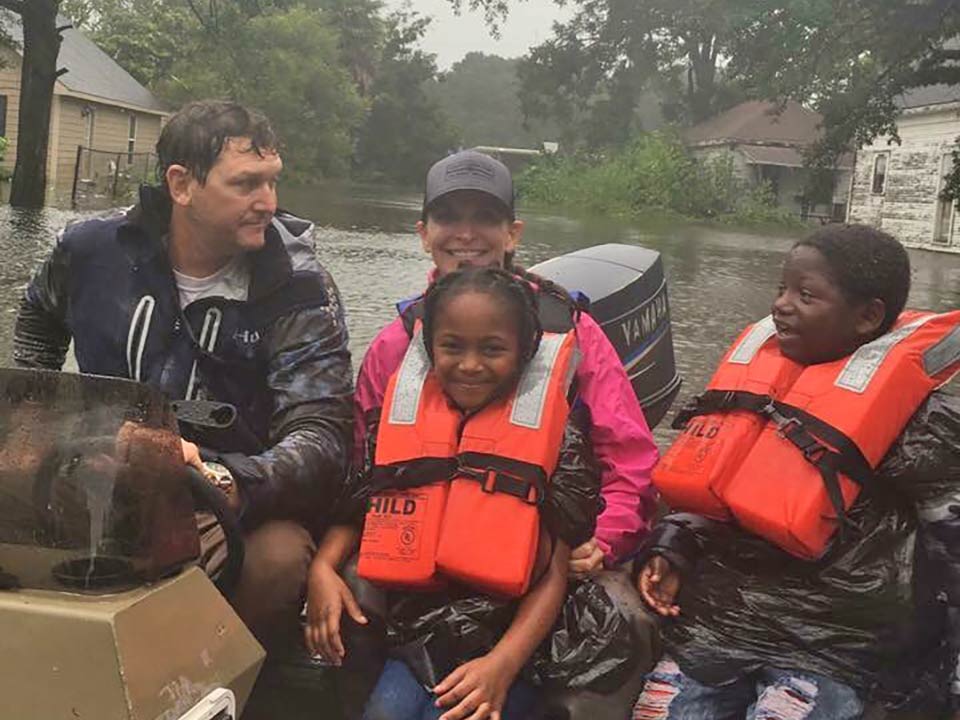 “With my regular job as a charter boat captain, it’s basically the same thing every day,” shared Jamie Hough. “You get up and go fishing, come home, clean the boat, get up and go fishing…150 days of that in a row, and then all of a sudden, it’s hurricane season. You just don’t know what the next thing entails.”

Growing up in Pawleys Island, Hough has experienced his share of hurricanes. As owner of Redfish Mafia Charters, he regularly competes in fishing tournaments along the Gulf Coast, working closely with area teammates and making connections along the way. So, when Hurricane Harvey devastated much of Texas and Louisiana in August 2017, Hough couldn’t sit by and watch. He and his wife posted a quick donation request over Facebook, then met friends and fellow givers at a restaurant in Mount Pleasant. Just a few hours in, they’d raised more than $5,000 and filled a truck with supplies. “My wife looked at me and said, ‘I think you’ve got to go to Texas.’”

“This was the first instance in my life,” explained Hough, “where I realized how important it is just to get up and go, and to figure it out along the way.” Following a 24-hour drive to Lake Charles, Louisiana, Hough and friend Sally Myers wasted no time. Listening to a local dispatch, they checked call-in addresses against a map in order to get directly to those in need. Between two boats, Hough and his crew rescued 180 people in just under a week. They helped local churches serve roughly 7,000 meals and, with donated money, helped fund a new roof for a home that housed 17 orphans. Hough took in two dogs, one of whom still lives with him today. And in just the first three days, they’d raised $32,000. “The hardest part,” explained Hough, “was leaving, knowing that the job wasn’t done.”

A year later, Hough assisted rescue groups during Hurricane Florence, and though he was happy to help, his previous rescue experience taught him that he and his fellow supporters could do better. In January 2019, Hough founded Southeast Rescue & Relief, a nonprofit organization committed to using 100% of donations to directly help those affected by natural disasters.

“That was the whole goal when we started this,” explained Hough. “We tell people where the money’s going. We show them pictures of whatever we bought with it. We put the balance on the Facebook page.”

After a boozy evening that ended in front his computer filling out an application to cook on TV, Hough started getting phone calls from California. He ignored them. “I completely forgot that I filled out an application,” said Hough.

He had never seen “MasterChef” when he was chosen from a pool of nearly 20,000 applicants and then sent to Los Angeles to cook for the likes of Gordon Ramsay. With a fan base of millions across 40 different countries, Hough took advantage of the chance to give Southeast Rescue & Relief a broader voice. “‘MasterChef’ gave me a lot of opportunity to tell my story and to tell folks what we do, and now it’s coming to fruition.”

Cooking on the show has opened a lot of doors for Hough. “People are hiring me to come cook at their house, which I love doing,” Hough said. “It’s hard work, but it enables me to cook with friends of mine.” Those friends include chef Bob Cook and front-of-house manager Ryan Babb of Edmund’s Oast, with whom Hough is currently producing a podcast called “Roasting Goats.”

Hough is teaming up with Nashville singer and songwriter Patrick Davis to host a multi-day festival called Songwriters in Paradise (SIP) to raise money for Southeast Rescue and Davis’ nonprofit, Hope4HopeTown.com. Previous SIP artists include Randy Houser, Dierks Bentley, Florida Georgia Line and Darius Rucker. The inaugural Charleston event will include a culinary spin, as an array of local and celebrity chefs will create dishes and cocktails inspired by the music of a participating artist. Funds raised will go directly to support long-term relief efforts – like restoring ground power and rebuilding schools – in the Bahamas.

Hough traveled to the Bahamas just one week after Hurricane Dorian decimated the islands. He cooked and served roughly 1,500 meals. Seeing the continued need for cooks on the island, Hough started a rotating roster of chefs and has been funding their travel to and from Hope Town since the last day he visited. Hough plans to return several times over the coming months, or “as long as there is a need on the island to have someone preparing meals.”

Southeast Rescue & Relief is constantly collecting and sending provisions. They split the cost of a barge with another agency, delivering over $1.5 million in donated goods – “enough to start and run a small city,” said Hough. They will continue sending provisions, including laptops and school supplies, while setting aside funds to rebuild schools and daycare facilities. “We’re partnering with another nonprofit organization so the high school kids can take classes online,” said Hough.

“It’s exhilarating, and it’s also liberating…Southeast Rescue has changed my life forever. I think about people differently. I think about life differently. The amount of compassion that I have for people – I don’t think that’s changed. It’s just easier for me to express it now,” he said.

“You’ve got to start somewhere,” shared Hough. “A jar of peanuts starts with just one nut, right?”

For more information about Southeast Rescue & Relief, including how to donate or volunteer, visit southeastrelief.org or call 843-364-1749.