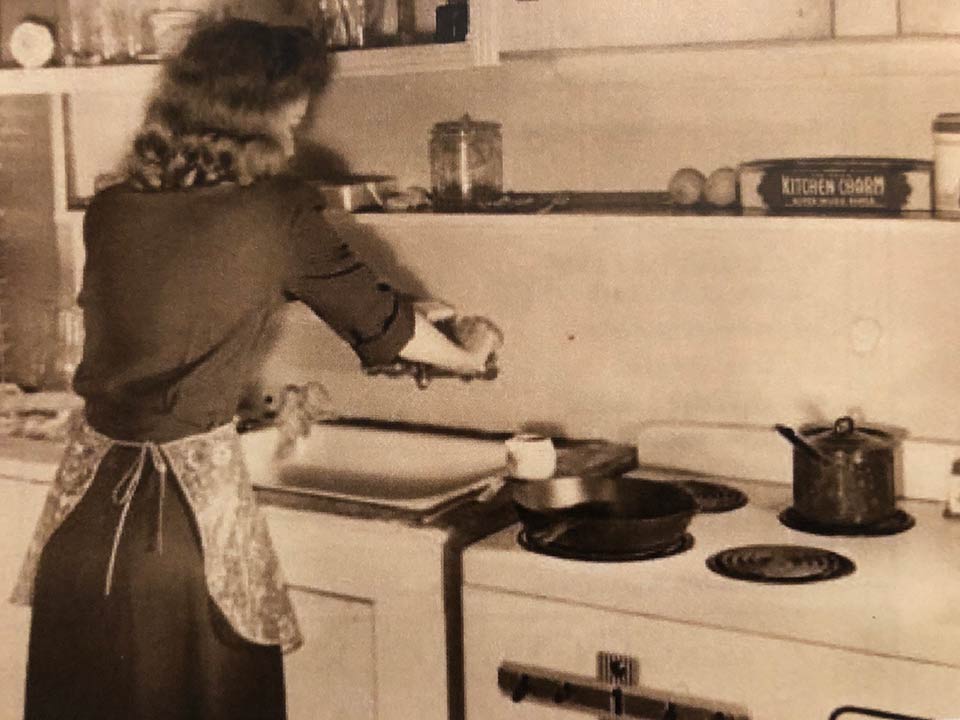 Grandmama cooks in her kitchen on Hasell Street in Charleston in 1946. She still has that cast iron skillet.

It was the morning of my grandmother’s funeral a few years back, and there I was: elbow deep in flour and yeast, kneading a warm, shaggy dough with an eye on the clock. I was on a mission to connect to her somehow, and in the kitchen that day, I did.

She was a phenomenal cook, but not one to use recipes – instead, she measured in sights and smells, and she also spoke mostly in French – the language being somewhat of a barrier to explaining her cooking process. I only have one recipe from her – written hastily on the back of a piece of paper – for “Mimi Bread.” It was a warm, crusty loaf that she had perfected over the years to feed her family of eight. It was a constant presence; whenever we visited, there were loaves of freshly baked Mimi Bread that we shared together, and she always sent us home with a loaf still steaming out of the fork pricks.

That was the recipe I was staring at as I kneaded the dough that morning, remembering the day we wrote it. I had begged for the recipe, and she invited me over one summer day to make it with her. She measured what she normally would have eyeballed and wrote the ingredients in her careful handwriting. Then she handed the paper to me to write the instructions – a contrastingly teen-aged scribble. I wished now that I had been more careful, more detailed.

As I made the bread that funeral morning, I remembered her soft touch as she took my fingers and put them in the water heating up on the stove, instructing in broken English to use it as soon as it reached a comfortable bathtub temperature. I punched the dough down as I did when I was small enough to kneel on the counter and help her as a young child. That morning, the dough was my therapy.

I divided the dough into two loaf pans and put them in my upper-oven, then scrambled to get ready. When I raced back to the kitchen, heels clonking and scarf fluttering in my own breeze – I was running out of time – I checked the oven window and then sat on the floor in my dress, both laughing and crying at the same time. The dough had grown exponentially out of the pans and baked into a mass the shape of my oven’s roof. In my laziness that day we wrote the recipe, I failed to note that it made four – not two – loaves. She would have cried from laughing so hard, too.

After detaching the bread from the roof of my oven, I sliced a piece anyway, threw a piece of cheese on top and ate it in the car as my husband and I sped downtown to pay our final respects. It was just what I needed. Taste and smell are scientifically linked to memories in the brain, and on that drive I was transported just where I needed to be: back in her kitchen with her one more time.

There are two types of cooks: those who, like Mimi, cook by feel, and others who, like my other grandmother (aka Grandmama), follow a recipe to a tee.

It was also following a death in the family that Grandmama found solace in cooking. She was famous for cooking endless Southern-style meals, and after my grandfather passed away, she put together a family cookbook and dedicated it to his memory.

What is special to me about this cookbook is that nearly every recipe has a small comment or story to go with it: how she first tasted the dish at a work gathering and “just had to have the recipe,” how she used to alternate red rice and tuna casserole to feed a family of six when things were tight, and how her mother passed down the macaroni pie recipe but preferred melting the cheese separately. I make the same oyster pie that my grandparents first tried on Yonges Island in the 1940s before their wedding. That oyster pie has been a prerequisite on our family’s Christmas dinner table ever since.

My copy of the book is 15 years old now and is splattered and tattered – signs of a great cookbook. I reference it several times a month; there are all the holiday favorites from family gatherings, but the everyday recipes like chicken pot pie and macaroni are staples in our weekly menu. Of course, I’ve altered some recipes in the interest of health or taste preference, but the blueprint of the original is right there any time I need it.

Now 95, Grandmama doesn’t do much cooking anymore, but thanks to her cookbook, I have the keys to unlock those memories anytime I want. Even better, I share them with my own children. Based on the stories in her cookbook, that makes at least five generations – FIVE! – who can, in a way, connect through many of these recipes.

There’s absolutely nothing wrong with being the cook who doesn’t read the recipes, and there’s nothing wrong with those who won’t cook without them. But don’t let your cooking style stop you from compiling the ones that matter to you or your family.

Ask your family or friends what you cook that they love, from holiday-style to everyday dishes. What they request might surprise you! If you don’t use recipes, take the extra time to make it, measure it and write it down as a labor of love. Keep those special recipes in one consolidated place, or make a book like my Grandmama did, and share copies with your loved ones. If you have time to jot down a few memories about a dish, do so. It might be your great-grandchildren that one day find appreciation for the effort and think of you and the memories made long ago. There’s no better time than the present to start your own recipe collection.