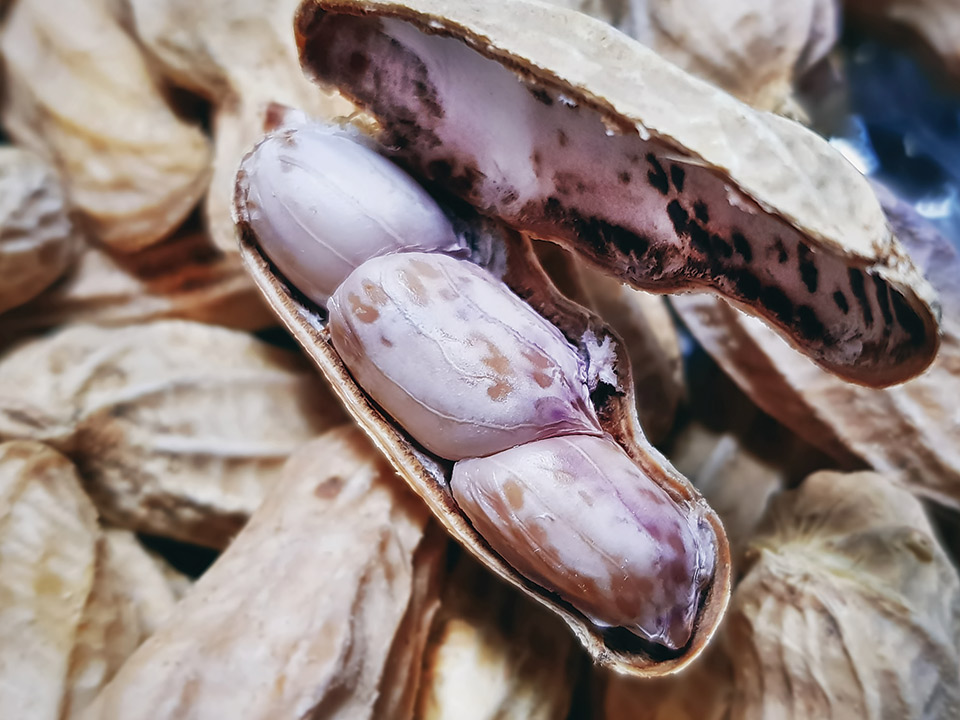 For decades in Charleston, this song was the proverbial “Pavlov’s Dogs” of boiled peanuts, calling hungry fans to get a bag of Tony the Peanut Man’s finest at local events for over 20 years. Though the legendary singing peanut purveyor passed in 2016, it’s still hard for long-time residents not to hum his song in the back of their heads as they shell South Carolina’s official state snack in any stadium or back porch in the Lowcountry.

By technicality, peanuts are actually a legume — a cousin of the pea — and not a nut. Though the plant grows and flowers above ground, shoots called pegs grow back down under the soil and produce peanut pods. When in season — particularly late summer and early fall — the “green peanuts” are what most will recommend using to boil your own batch, as the green infers fresh, or just out of the ground. Though it’s possible to soak dry, raw in-shell peanuts for the job, the green variety are the peanutty gold-standard.

Boiled peanuts are steeped in history. Originating in South America, peanuts were brought to Africa around 1500 and became a common staple in West African cooking. Peanuts were then introduced to this continent by way of the slave trade. Though boiling peanuts was not a new concept by the time the Civil War began, the tasty practice grew in popularity in the Southern states because they were protein-rich, portable and easily available. By the turn of the 20th century, boiled peanuts had climbed the social ladder and were commonly served at events and weddings in small towns around South Carolina and soon other Southern states.

Today, you’ll see boiled peanuts on menus of some upscale restaurants in the form of hummus, succotash and the like, but the good ol’ fashioned in-shell boiled peanuts — simmered in briny water and eaten by popping open the softened shell with your teeth or fingers to get to the meaty inside — have become the quintessential leisure snack.

It’s an acquired taste for those accustomed to the crunchy goodness of a roasted peanut, but, once you’re hooked, the snack is hard to put down. The original saltwater bath is the common go-to, but Cajun, ham and garlic are also popular boiled-peanut flavors. Make them at home or pick up a bag of the real thing at a roadside stand.

Ruke’s, located at 378 Mathis Ferry Road, is a seasonal stand open from May through New Year’s Day. They carry green peanuts so you can make your own batch, and they also have fresh, hot boiled peanuts to save you the trouble.

“We only have one flavor, and the flavor is Ruke’s,” Arthur Brown smiled. “I can’t tell you the recipe because it’s a family secret.”

He explained that there are two types of green peanuts that help stretch the season. “There’s a white and a red peanut; they’re both ‘green’ fresh peanuts, but the flesh is white or red,” he said. “The red ones are first and go on until around July, and then the white one comes in and takes us on through the rest of the season. We use them as long as they’re available — even into the fall.”

Once you develop a taste for them, you’ll find yourself a connoisseur of your own particular style. Too salty? Not salty enough? Do you find yourself reaching for the oneor- two-in-the-shells, or the grand five-or-six-loaded nut? Do you lean toward the softies or the ones you have to bite just right to crack open? The options are endless. So kick up your feet, enjoy the breeze on your porch and get to cracking a bowl-full with your friends. You just might start to hum “Got some boiled and I got some roasted,” as you tap your toe and shell those nuts.